“L’ALIANÇA IS LIKE OUR HOME’S LIVINGROOM: IT IS WHERE WE EAT, WHERE WE DRINK AND WHERE WE TALK UNTIL YOUR HEART TELLS YOU ENOUGH”

The history of L’Aliança goes back to 1953, when Lluís and Adela came to run the café-bar of the then Sindicato Alianza Agrícola de Anglés. Until the 1990s, it had been an important meeting point of the town and the surroundings, well known for its sandwiches, Adela’s breaded calamari and the long and quiet afternoons of cards and casino games played on the beautiful marble tables.

Some years later, their sons Josep Maria and Lluís joined the business, incorporating gourmet food and drinks and promoting the rock&roll live nights with long drinks service. As a result of the success of the plates that Lluís started to cook, the two brothers decided to open a small restaurant in an annexed room. Five years later, they decided to close the café-bar business in order to convert that impressive salon into the new space for the restaurant: it was in that moment that the restaurant l’Aliança d’Anglès was born.

As a result of the effort and hard work, L’Aliança began to be recognized by the gastronomic world receiving various distinctions, amongst them it is worth mentioning the Michelin Star won in 2008. Unfortunately, the star stopped shining when Lluís died 5 years later.

After a time of reflection, Cristina and Marina, Lluis’s daughters, together with their uncle Josep Maria, reopen the restaurant with the intention to merge the spirit of the grandparents’ café-bar with Lluis’s cuisine.

In 2019, Álex Carrera, Cristina’s life partner, joins the team to take control of Aliança’s kitchen, trying to recover the spirit of the restaurant that Lluís left.

Álex cuisine’s is recognised with a Michelin Star at the end of 2020 and, at the beginning of 2021, with a Repsol Sun, placing L’Aliança again in the national gastronomic scene. 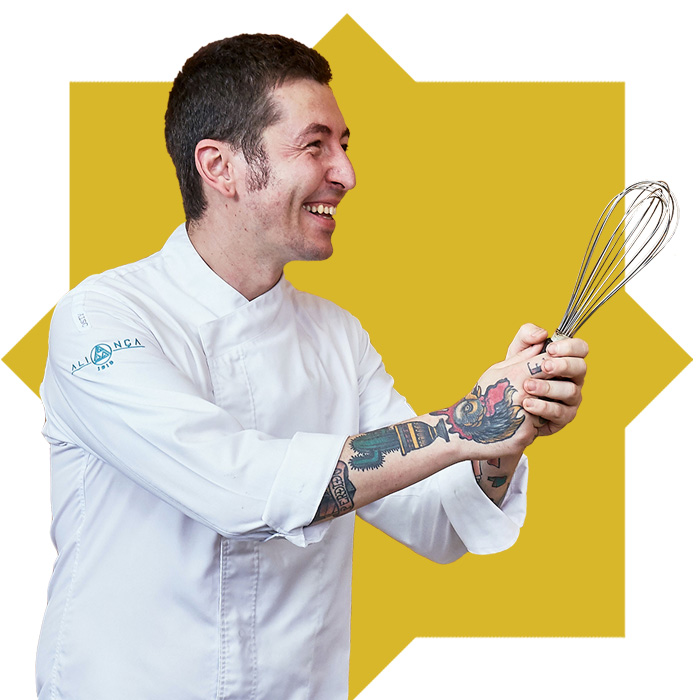 My passion for cooking led me to leave aside my economics studies to dedicate myself to the world of gastronomy. My curiosity to learn led me to work with great chefs like Fermí Puig, Andoni Luis Aduriz, Jean Louis Neichel and the Roca brothers. My desire to grow threw me to take the reins of L’Aliança kitchen.

I have the passion for the hospitality world in my blood. When I finished my studies on tourism I already was willing to help the family restaurant by contributing with my fresh and young spirit. My constant interest in this sector also led me study sommelier and protocol skills. L’Aliança is part of me and now I feel that I am part of it too.

Do you want to make a reservation?

DO YOU WANT TO WORK WITH US?

This website uses cookies to improve your experience while you navigate through the website. Out of these cookies, the cookies that are categorized as necessary are stored on your browser as they are essential for the working of basic functionalities of the website. We also use third-party cookies that help us analyze and understand how you use this website. These cookies will be stored in your browser only with your consent. You also have the option to opt-out of these cookies. But opting out of some of these cookies may have an effect on your browsing experience.
Necessary Always Enabled
Necessary cookies are absolutely essential for the website to function properly. This category only includes cookies that ensures basic functionalities and security features of the website. These cookies do not store any personal information.
Non-necessary
Any cookies that may not be particularly necessary for the website to function and is used specifically to collect user personal data via analytics, ads, other embedded contents are termed as non-necessary cookies. It is mandatory to procure user consent prior to running these cookies on your website.
SAVE & ACCEPT
Menu
T. +34 972 42 01 56